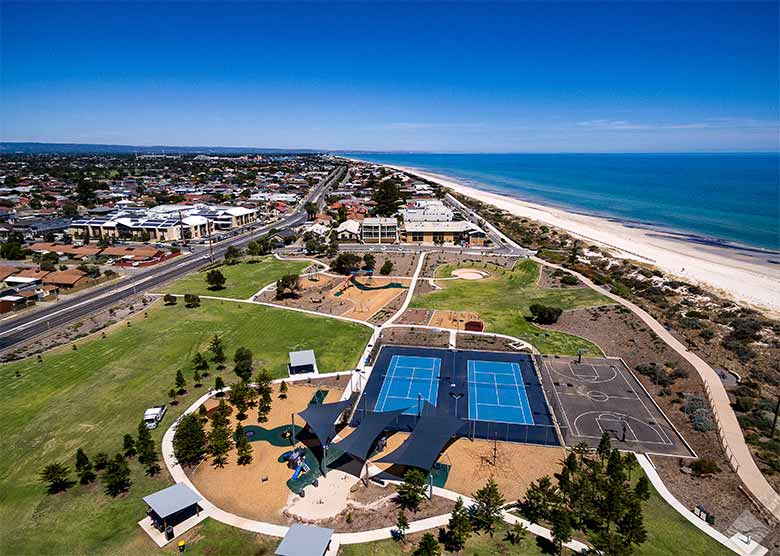 We have some of the most beautiful beaches in South Australia, running from West Beach right through to Semaphore with 14.5kms of pristine coastline. Being able to spend time along our beaches is really important for our residents and visitors into the City.

The Government of South Australia is committed to the development of a Coast Park from North Haven to Sellicks Beach. Coast Park provides an opportunity to develop a continuous public link in a park like setting along the metropolitan coastline, further enhancing public use and enjoyment of the coast.

Enquiries regarding the Coast Park project should be directed to the State Government's Plan SA Service.

Following extensive consultation under the Linear Parks Act 2006, a Linear Park has been established between Third Avenue, Semaphore Park and the northern edge of Wara Wayingga-Tennyson Dunes Conservation Reserve (Stage One).  A final design has now been approved for the shared-use path and associated landscaping.

Construction is expected to begin early next year and will be managed by the Department for Infrastructure and Transport, which will work with community and stakeholders to ensure any disruption is minimal.

Consultation is now open for a potential Stage Two – a proposed Linear Park between the southern edge of the Wara Wayingga-Tennyson Dunes Conservation Reserve and Terminus Street, Grange.

The Minister for Planning and Local Government is seeking feedback which can be provided until 5:00 pm, Friday 17 September 2021 via the Plan SA website.

If you have any enquiries about the project you can:

Council resolved the outstanding court action with the Coastal Ecology Protection Group (CEPG), with the CEPG agreeing to consent to judgment being entered in the Council’s favour.

Council on weighing up the cost of additional court proceedings (estimated at up to $450k) agreed to a final $77,500 payment to the CEPG given consent from them being entered in the Council’s favour.

We look forward to the State Government commencing construction in the northern section for Stage One - establishing a Linear Park between Third Avenue, Semaphore Park to the edge of Wara Wayingga-Tennyson Dunes Conservation Reserve in 2021. The State Government will also begin consultation on the design / alignment of the southern section for Stage Two to establish a Linear Park between the edge of Wara Wayingga-Tennyson Dunes Conservation Reserve to Terminus Street, Grange. This consultation will be under the Linear Parks Act and is anticipated to occur in 2021.

The City of Charles Sturt has welcomed the State Government’s announcement to proceed with the Coast Park. Detailed design followed by construction for Stage One of the Linear Park between Third Avenue, Semaphore Park and Terminus Street, Grange was given the go ahead by Minister Chapman.

We have delivered kilometres of the Coast Park across our coastline, and look forward to the State Government progressing the last remaining section.

The State Government is currently undertaking consultation on Stage 1 of the proposed Linear Park (Semaphore to Grange) and proposed Coast Park shared-use pathway within it.

To get involved in the discussion and provide your feedback go to Yoursay.sa.gov.au

The final section of the path yet to be constructed is from Third Avenue, Semaphore Park to Shore Court, West Lakes Shore, and Bournemouth Street, Tennyson to Terminus Street, Grange (excluding the Tennyson Dunes Conservation Park section which is under the control of the State Government).

Since 2013, the City of Charles Sturt (CCS) has undertaken extensive consultation with foreshore property owners and occupiers as well as the broader community, including open ‘speak out’ sessions and the formation of a Coast Park Project Reference Group (CPPRG).

The CPPRG identified four options for the path alignment, as the basis for broader community consultation. Consultation on these options in late 2014 resulted in 1,100 responses: with both Options 1 (CPPRG Preferred Option with a dual path) and Option 2 (Beachfront shared use path) receiving similar levels of support. See Council Report.

As Coast Park is a joint project between State and Local Government, CCS sought direction from the State Government regarding a preference for either of these two shortlisted options. The State Government advised that funding would only be available for Option 2 (Beachfront shared use path) as it is the option that aligns with the coast park objectives. As has been widely reported a community group, the CEPG, took Council to court in 2017 challenging the previous decisions of Council that determined that construction work commence on the final section of Coast Park.

The attachment below is a summary of the judgement that provides an understanding of what was a very complex determination (170 pages).

Since the late 90s, we have worked with neighbouring councils and State Government to deliver the State’s Coast Park initiative. A key aspect of the project has been the development of a continuous, shared use recreational path along the foreshore which caters for the use and enjoyment of people walking, jogging, cycling, wheeling prams and wheelchairs. In addition to the path, we have provided infrastructure to enhance the surrounding environment including new landscaped areas, park furniture and artwork.

To date the City of Charles Sturt has completed approximately 7km of the Coast Park path. The first section of Coast Park completed was in 1998 along Marlborough Street, Henley Beach. In subsequent years we have completed construction from West Beach through to Grange and sections within Semaphore Park.

These sections connect West Beach to Grange Jetty and the River Torrens, with the path providing a unique recreation experience along the coast, connecting our vibrant coastal destinations of Henley Square, Grange Jetty and West Beach. The completed sections also link to important destinations along the coast outside of the Council area including Glenelg, Semaphore and Outer Harbour. The State Governments vision is to provide a continuous Coast Park along the entire metropolitan coast.

The path is 3m wide, this width meets the relevant national standards (Austroad 2009 Guide to Road Design Part 6A – Pedestrian and Cyclist Paths). The path is designed to allow prams, cyclists and wheelchairs enough space to pass one another safely. The aim throughout this project has been to revitalise and sustain a pathway that protects sensitive dune areas and provides a healthy, diverse and accessible pathway. The joint project with the State Government has improved pedestrian and cycling facilities along our coastline, and research demonstrates that access to beaches encourages recreational walking, jogging and cycling.

The construction of the path hasn’t always been an easy process, with many competing factors to take into account. Respecting the needs of residents who live along the foreshore to reasonable privacy, having the path alignment next to our precious dune systems and our need to develop a path that is not at significant risk of storm damage have all been important considerations.

The high level of interest from residents all over our City, and from wider metropolitan Adelaide, have also needed to be reflected in how we construct the path. We are lucky to be able to welcome so many users of the path down to our coast, and are proud of providing such an open, accessible path that has become a destination.

As well as accessibility and the ability to attract visitors to our coast, we have a responsibility to provide quality recreational infrastructure for our residents. The continuous coast path ensures a whole range of people can use the path together in a safe environment, encouraging health and wellbeing. Our involvement in the construction of the path ensures we are encouraging residents to be active, get outside and move – whether it be through walking, cycling, jogging or a mix of all three!

Council continues to support the South Australian Government’s Coast Park Path initiative to establish a continuous path from North Haven to Sellicks Beach that enables our residents and visitors have access along, and enjoy, the coastline on a path that is accessible for all.

Council, having reviewed the Supreme Court decision, has resolved to continue to pursue this final section of Coast Park. It is doing so on the belief that completing the job is important for both the people within Charles Sturt and visitors to the area.

To pursue this objective Council must revisit a number of matters in an endeavour to meet its statutory obligations as defined by the Local Government Act.

One of these that requires early consideration is that of biodiversity impacts of any proposed pathway that may traverse the dunes west of properties between Terminus Street, Grange to the Tennyson Dunes Conservation Park.

To undertake this work Council has engaged the services of a consultant (T & M Ecologists Pty Ltd) who also advised the State Government on the possible vegetation impacts of the recent pathway upgrades in the Tennyson Dunes Conservation Park. You can read about this proposed work that is to commence in January 2019 by viewing the council report from 10 December 2018 Council Meeting .

The findings of the Environmental Report will be most useful as it will:

To assist T & M Ecologists assess the coastal dune landscape, we have asked surveyors to peg the previously proposed Coast Park path alignment. This means community members may see surveyors and ecologists working in the coastal dunes during January and February 2019.

A letter advising local residents of this environment assessment has been distributed to those living adjacent the land to explain why they might be seeing people in this location undertaking some survey work.

This study should be completed in February/March 2019 and a further update will occur at that time, including this website.