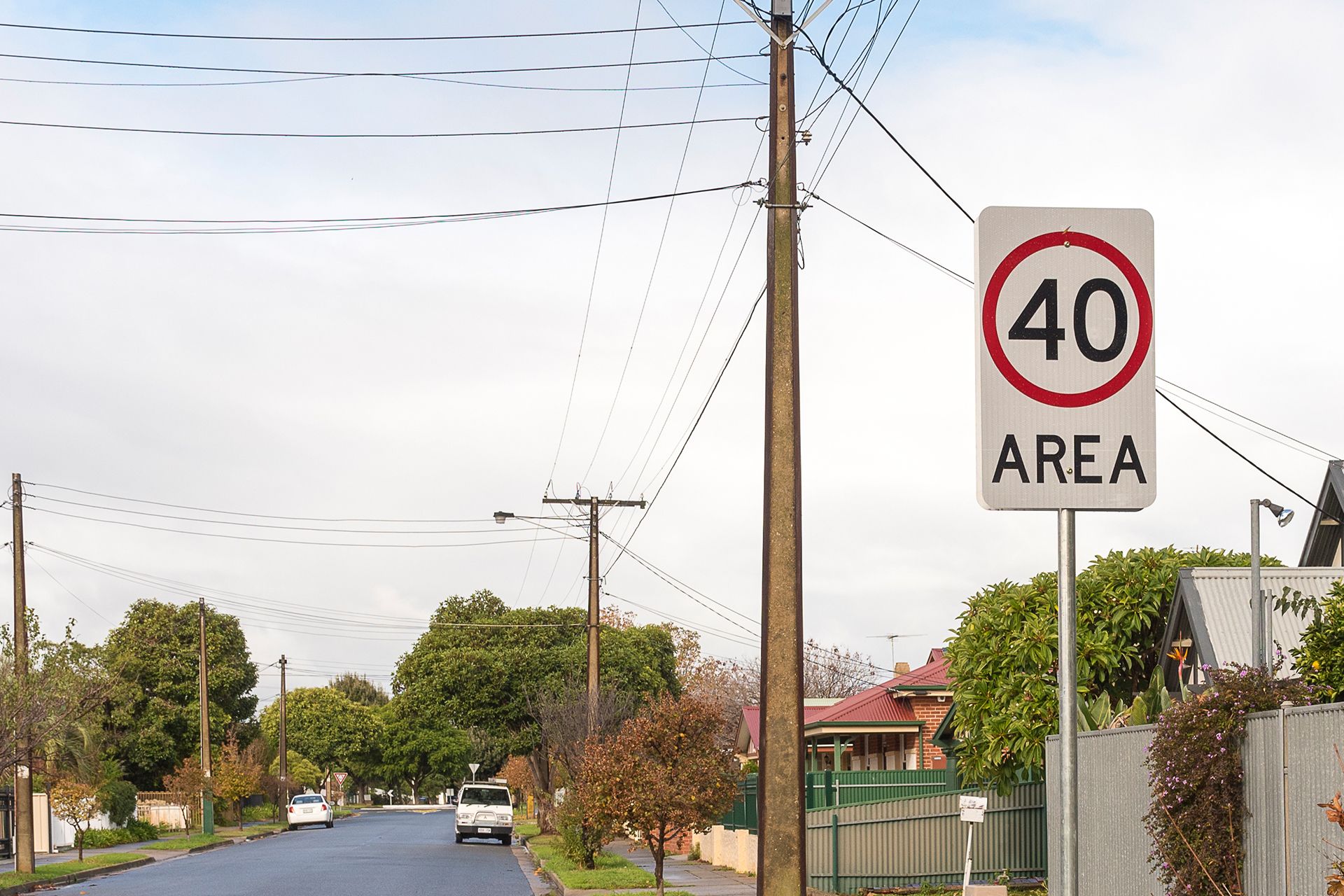 Results of the technical review, which investigated the impacts of the lowered speed limits on traffic speed, traffic volumes and crash data, completed by the University of Adelaide, and the community consultation on community sentiment toward recently introduced 40km/h Areas completed by Painted Dog Research, were presented to Council in July with the key findings defined below.

Driver speeds have decreased
In the new 40km/h Areas, there has been an expected reduction in driver speed (85th percentile speeds reduced by 4.27km/h, from 48.0km/h to 43.7km/h) which is similar to results found when the state default speed limit was first reduced from 60km/h to 50km/h in 2003. Based on historical trends in other 40km/h Areas throughout metropolitan Adelaide it is expected that speeds will continue to decrease over time as drivers adapt to the change and 40km/h becomes the new ‘normal’.

The community consultation found that 55% of those who live in a new 40km/h Area, do not support the change in speed limit with suburbs closest to the Adelaide CBD being mostly in support, and those suburbs furthest from the CBD being mostly against (between Allenby Gardens/Woodville Park and the coast). Further results found that:

In the consultation, you told us that 40km/h Areas:

Are ignored by drivers
From the technical review, it has been found that drivers have reduced their speeds from an 85th of 48km/h to 43.7km/h.It is unreasonable to expect driver speeds to reduce by exactly 10km/h. A speed reduction of less than 5km/h is not likely to be detected by on viewers. These results are as expected for a speed limit reduction, are comparable to other 40km/h Areas and are likely to decrease further over time.

Are a waste of Council time and money
The cost of 40km/h Areas that improve road safety within an entire suburb/area is much lower than the cost to install speed humps on one single street.

Are confusing with different speed limits
There are areas where the speed limit changes many times, such as the Henley Precinct. Drivers also must concentrate on the difficult task of driving. DPTI sign requirements do not enable many repeater signs. Confusion and frustration is understandable.

Are inconvenient for most drivers
There is a balance between road safety and access. The reduced speed limits are less convenient for drivers; however, they could prevent a casualty or fatality.

Do not deter cut-through traffic
While technical review has shown us that traffic volumes have reduced, cut-through traffic is unlikely to avoid an area due to a reduced speed limit or a series of traffic controls like speed humps, because the time spent waiting at the arterial road intersection is likely to cause the arterial road route to remain the longest journey.

Do not improve safety for all road users/Do not reduce the chance of crashes
Although not statistically significant, results suggest a reduction in casualty crashes.

Have added too much time to trips
When local streets are used for their intended purpose of getting people to/from homes and local facilities to the surrounding arterial road network, the time taken for the journey increases by a few seconds only. Much more time is lost by slowing down at intersections within the local street network.

Conclusion
We have concluded that no significant modifications be made to existing 40km/h Area Speed Limits at this time and that further reports be presented to Council at key stages of the development of the State Government’s Road Safety Strategy for SA providing an update on how this document may impact existing 40km/h Area Speed Limits and road safety in Charles Sturt.

Presently, just over 50% of the local streets within the City of Charles Sturt are within a 40km/h Area, with all of them now having been in operation for a minimum of 12 months.