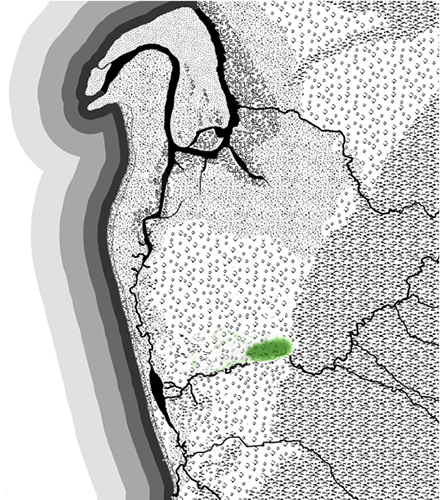 Karraundongga was a place on the river travelling route between the coast and the foothills. Its name starts with karra river red gum which links to the name of the river but its full meaning is unclear.

This area was also a sleeping place and burial grounds were uncovered during the settlement of Hindmarsh. Amongst other places, burials were found in the clay pits at Bowden, which were dug for brick making.

Whilst the Kaurna were travelling towards Wonggayerlo camp grounds, they would have camp places which they would re-visit along the way, perfectly positioned on high ground above the flood ways on the river. As the movement of the people towards the coast was in the spring, the rains would not have completely dissipated. All along the track during the spring is where they would begin the process of educating the young about their environment and teach them what mai vegetable foods to gather and how to identify the age of the karra, and what distance from the tree trunk and depth to dig to get to the roots where they would find barti witchetee grub. Barti was a favourite food source due to the high content of protein. Kungarla river craw fish would also be gathered with small string nets made out of the wito reed which would be scattered along the stretch of the river.

Kudlyo black swan was another source of food and during this time of year the new cygnets would be nine months old and the paru meat from them would be tender. This was important as some of the birds were taken before they marked their territory and found a mate for life, this was the natural law. Budni mallee fowl eggs would be taken, and on occasions wolta bush turkey. Pilta possums would also be taken during the day and night, the men would climb the karra with the wadna climbing stick and poke a stick down the hollows and if there was a possum in there they would then twist the stick into the fur of the possum gaining leverage and pull them out or use fire to smoke them out.

The area was sometimes flooded after big rains when the river overflowed its banks. Periodic flooding along the river west of Adelaide continued until Breakout Creek was cut through the sand dunes to drain Witongga and the river’s waters to the sea.

The area was occupied by settlers soon after colonisation and the karra along the river were chopped down for the industries that came there, like the tanneries and brick kilns. The tanners soon made use of the native animals as well as sheep and cattle, tanning the skins of tarnda kangaroo and wallabies.

Wool-washing at Hindmarsh. — Several members of the party that visited Messrs. Haussen and Catchlove's brewery on Monday concluded their afternoon's pleasure by inspecting the new dam recently erected at Hindmarsh by Messrs. W. Peacock & Son. The dam crosses the River Torrens, and is constructed to make a sufficient sheet of water for carrying on wool-washing operations more thoroughly and successfully. It is 80 feet in length, and averages 27 feet in thickness. There is an outlet at the side, through which the ordinary flow of the Torrens passes, and the structure is expected to throw the water as far back as the Hindmarsh Bridge. Everything has been done to make the work solid and substantial; and it is believed it will withstand the force of any flood. If so, Messrs. Peacock and Son will have given our Corporation excellent example in the construction of dams. (SA Register 21 may 1870 p. 8s)