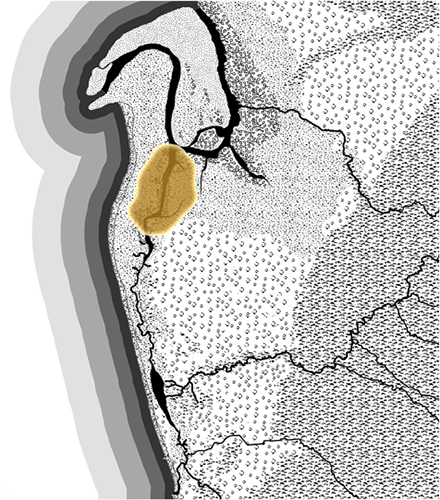 Yerta Bulti, the Port River region and estuary, was at the end of a continuous ecological system at the heart of which was the fresh water flowing from the hills, across the plains, through the estuary and to the sea.

The Yerta Bulti region provided another important place for Kaurna meyunna to get food. Estuarine environments are highly productive and are important nursery areas for many marine species. The networks of creeks, mangrove forests and saltmarsh floodplains provide refuges for juvenile fish, crabs and prawns. The high concentration of these animals draws in larger predatory species to hunt and patrol along the deep channels found there.

Tides have a major influence on mangrove forests. During high tide the mangrove roots and trunks create a complex matrix that provides refuges for juvenile fish and crustaceans. It is during these periods that larger fish enter the mangroves through the creeks and deep channels to feed. At the peak of the tide the Kaurna hunters would place their fish traps and nets at the entrances of the creeks and channels to trap the larger fish as they tried to leave with the receding water. As the tide lowered the fish were concentrated into small pools where drag nets and spears could be used to collect them. Today there are remnant Kaurna fish traps located along the metropolitan coastline. These lasting examples showcase the ingenuity and deep understanding Kaurna meyunna have of the marine and estuarine environment.

The mangroves are ideal places to find a range of shell fish such as kakirra black river mussel, kulutunumi periwinkle, kunggurla river crawfish, kuti cockles and large oysters. A recent trench excavation near the Old Port revealed a shell midden which held a number of molluscs and camp fire hearth ashes. The intertidal mud flat areas of the river would have provided a habitat for worms, crabs, mud clams and seagrass and an important foraging zone for fish. These areas could provide food at both high and low tides. During low tide the Kaurna could walk amongst the short leaved seagrasses and use their toes to feel for clams hidden in the mud. In the shallow pools with longer seagrass, blue swimmer crabs could be easily caught using nets or spears. During high tides hooks, such as pirri kuya bone hook, would be used to catch fish as they foraged through the seagrass and mudflats looking for worms and small crustaceans.

The mangrove area supported breeding seabirds that would gather and build nests amongst the mangroves, sand dunes and islands, some of which still occurs today. These sites provided a seasonal source of fresh eggs and bird meat. Wirras throwing clubs were used to kill resting birds and nets tied between branches of trees fringing known nesting sites were used to catch birds as they fled the nest. The river was, and remains, a complex environmental system. Unique to the region, it is the largest estuarine mangrove forest river system in Gulf St. Vincent.

A large sand dune (the Gillman Dunal system) stretched inland from the coastal dunes, traversing the southern area of the Yerta Bulti region and was part of the area utilised by Kaurna meyunna.

Now almost entirely levelled or developed, [the dune] offered elevated locations extending well into the low lying, flood prone environments surrounding the southern edge of the estuary. The strategic importance of this feature is illustrated in the number of sites found along its length including camps that were maintained well into historic times in and around Port Adelaide/Yertabulti (PAE, 2007:11).

Dramatic changes to Yerta Bulti commenced when the first port, the landing site of the first settlers from early 1837 until October 1840, was located on the southern reach of the river - now part of West Lakes. For the Old Port, or Port Misery, the landing site comprised the mangrove lined banks of the river itself and later a canal cut through the mangroves to higher ground in the sand hills, ending with a landing wharf on the corner of what is now Old Port Road and Frederick Street, Royal Park.

Colonel William Light selected the port site in late November 1836 and on the 22nd he wrote of ‘The Harbour’:

Yesterday we had beautiful weather, with a fine breeze. Mr Kingston [Light’s deputy] accompanied me in the surveying boat to examine that creek taking a southerly direction which I had not had time before to look at carefully, and which has since been running so strongly in my mind that I could not rest until I had seen it again. We were more than delighted to see it running into the plains at such a distance, and I am now more than ever persuaded that it is connected with the fresh water lakes [of the Torrens], if not, it extends to within a couple of miles of them, and one of the finest little harbours I ever saw is now fairly known. … The eastern coast of Gulf Saint Vincent is the most eligible [for settlement], if a harbour could be found – that harbour is now found – more extensive, safe, and beautiful, than we could ever have hoped for.

On the southern reaches were samphire flats and Kangaroo honey-myrtle.