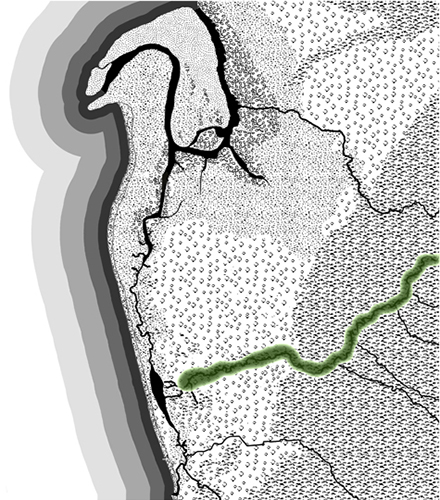 Karrawirraparri Red gum forest river is the main river on the Adelaide Plains. It flows from the Mount Lofty Ranges in Peramangk Country to Witongga, the freshwater wetlands near the coast, and is fed by several creeks and springs along its 80 km journey. The river is also known as Tarndaparri Red kangaroo river. It was named the Torrens by Colonel William Light after Colonel Robert Torrens.

In summer the river was a series of large waterholes with a trickle of water, which sometimes disappeared under sections of gravel and sandy bed. In winter it was full of water. The river was known as Yertalla everywhere when in flood. Yertalla has been translated as ‘water running by the side of a river/inundation’ and has survived in the suburb name Yatala.

Karrawirraparri was a prime camping area for Kaurna meyunna and provided many food and other resources as well as shelter. It was also a travelling corridor between the coast and the foothills and places in between. Early colonist A. H. Davis noted that ‘[a] native track runs on either side of the Torrens, and [it is] pretty well trodden too’. The river banks and nearby were a sleeping place where the old people were laid to rest. Many burial places have been located and lost as the river has been disturbed over time.

Kaurna shared the river area with many other creatures, including platypus, bilbys, possums, kangaroos, birds, waterfowl and fish. There are still scar trees along the river showing were Kaurna meyunna have cut shields, carrying dishes and toe holes to climb up into the karra.

… there is a native searching for this caterpillar. How cleverly he ascends the trees, first displacing with his wooden cuttah (a pointed stick of hard wood, which he holds in his right hand) a small apiece of bark, he thrusts the same weapon firmly into the tree considerably higher, and raises himself by it as to plant the ball of the great toe in the hole he first made, then clasping the trunk with his left arm, he renews the process until he reaches the fork of the tree. There, now he is examining for the “strong indications” of the caterpillar. They are pretty plain; for as the animal feeds within, the sawdust and excrements are forced upwards by his onward progress to the hole by which he first entered. The native again applies the pointed wood, the bark falls in very small pieces and, mark him, he takes from behind his ears a very small, nicely cleaned-up, hard piece of wood, and about as thick as a crow quill, and about eight inches long in length; tightly fixed by the sinews of the opossums at one end is a piece of bone barbed on one side; he inserts this into the hole, and withdraws it with fine, fat, fleshly monster of a caterpillar dangling upon it; if he is hungry, he will forthwith make a bonne bouche of it, but if not, he will secure it in a little grass for his evening meal at his wurley. Ah! see, his head is thrown back, and the larva is swallowed (Davis in Kraehenbuehl, 1996:39).

A barti from along the river

And the pilta possums too were in the karra river red gums that lined the river. Around there they’d sing an enchantment over the pilta to hunt them. They used to smoke them out of the trees, use fire and smoke to get them out. They used to climb up the tree. They cut holes in the tree and put wooden pegs in them to help them climb the tree; they would alternate the pegs from one hole to the next. Holding onto the peg in your hands and putting your feet in the holes.

Like that bloke’s skeleton that had the broken leg – the 1000 year old skeleton found at Fulham; a six foot tall man; the one who had to sit for three months to wait for it to heal. Maybe that’s how he broke his leg, hunting possum, climbing the tree to hunt the possum; maybe the toe hole failed and he fell (Karl Telfer, 2013).

William Cawthorne made a sketch of this way of climbing the trees. The man is using a new technology, an axe, as well as the traditional wadna, the sharp pointed hardwood stick used as a multipurpose tool.

One account of Kaurna life along the river was provided by settler Thomas Day:

[Aboriginal] Women and children spent most of their time at the Torrens River – children bathing and practicing with spear and small waddy – women crabbing and going in the river with a net bag and picking up cockles. I have seen them go down – And I thought they would never rise again, They got many cockels And rose again on the other side after being under water A long time. The river torrens was A chain of water holes very deep When not in flood. It was full of timber Very dangerous to go amongst. Their time was also employed making mats, nets and rope clothes lines … they would then sell or exchange for food from the settlers … (Hemming & Harris, 1998:43)

And colonist George Hamilton wrote about it this way:

The land in the vicinity of this river was timbered with noble trees, and its banks sloped down to the water in gentle undulations thickly clothed with grass. The river itself meandered through a tangle of tea-tree, rushes, reeds, and many flowering weeds, here and there almost hidden by vegetation, but at intervals opening out into pretty ponds or tolerably large waterholes; along its banks grew in profusion the wattle (acacia) with its golden sweet-scented blossoms, as well as the noble eucalyptus, here at that time in great beauty. Towards the sea, to the westward, the land was flat, swampy, and not very picturesque (Hamilton, 1879 in Kraehenbuehl, 1996).

One of the first paintings of the river, with its karra-lined banks, shows where the first bridge was built in Adelaide. The bridge was soon washed away, one winter. This area is now under the Torrens Lake.

Another painting shows an area that is now in Flinders Park/Lockleys.

The karra along the river and nearby were used by the settlers for building and firewood and almost disappeared.

The meandering river did not reach the sea. It fanned out into several branches as it flowed into Witongga where the waters periodically formed wetlands before slowly draining away:

Our ramble is conducting us rapidly to the point where the Torrens ceases to be a traceable river. This then, is the Reedbeds; but ere we pass this last belt of splendid gum trees, let us turn aside, and see what all the noise is about; methinks our sable fellow [Aboriginal] is only one of a company whom we shall find fishing there. Just as I thought! What a wild, laughing, merry set they seem! The women with their loads, and the younger children are seated on a dry sandbank; the bigger boys and the men occupied in the pools, disturbing the water, and frightening the unfortunate fish out of their propriety. Every now and then the spear hooks a victim, which is thrown to the women, who at once with their teeth decapitate the fish, and then deposit them in their little green baskets or rather nets. These fish are very delicate eating, and are very abundant; they take the bait generally very readily from the hook, nay even a bent pin, on which a blowfly or a slug has been impaled is effectual. (Davis in Kraehenbuehl, 1996:39)

But this has been changed and an outlet to the sea, Breakout Creek, was constructed in the 1930s.