In 1860, Hindmarsh District Council erected its first civic building, the District Hall, on the corner of Milner Street and Port Road.

In 1875 following the separation of Woodville from Hindmarsh, the Council was forced to sell the Hall. The profits were split between the new Corporation of the Town of Hindmarsh and Woodville District Council.

Following its sale, the District Hall became the Institute Library. The Corporation also remained as occupants.

The corporation’s attention turned to finding themselves a permanent home that would include a large hall that ‘would be useful for concerts and other entertainment purposes which would have the effect of cultivating the taste of the people’(Institute and Town Hall for Hindmarsh, Evening Journal, 3 April 1877).

In 1880, the Corporation and the Hindmarsh District Library and Mechanics Institute entered into a 99 year lease for the Institute Library property. A new ‘Assembly Hall’ was built to the rear. The second storey was completed in 1886.

Further renovations and extensions, including a larger hall, were undertaken in 1936. The frontage was refaced to the current art deco design. At the time it was boasted that the town hall was one of the largest and most up-to-date municipal buildings in Australia.

The town hall also doubled as a suburban picture theatre. In the early 1900’s movies were screened as part of ‘Bruce’s Suburban Pictures Circuit’.

The Star Picture Theatre chain remodelled the hall as a silent picture theatre in 1916. A dress circle was added and the ground floor enlarged. Seating capacity doubled, from 500 to 1000.

When the new hall was built in 1936, the capacity again doubled. 2000 patrons could be accommodated on two levels.

It featured a tiered gallery, a curved ceiling and a beautiful backlit filigree arched proscenium. Architect Chris Smith was responsible for the interior.

Greater Union took over management in 1947. The last screening of a movie in the town hall under the Greater Union banner was in August 1966. The film was an Elvis Presley double – ‘GI Blues’ followed by ‘Blue Hawaii’.

The town hall continued to be run as a cinema by various independent operators, including Cinema Italia and Cinema Europa, until a major fire destroyed the interior in 1975.

It was rebuilt in 1979 and housed a small movie theatre, library and roller dome.

Following the amalgamation of the Hindmarsh and Woodville Councils in the early 1990s, all Council operations relocated from the site, and the building was purchased by the Education Department.

The building is State Heritage listed. 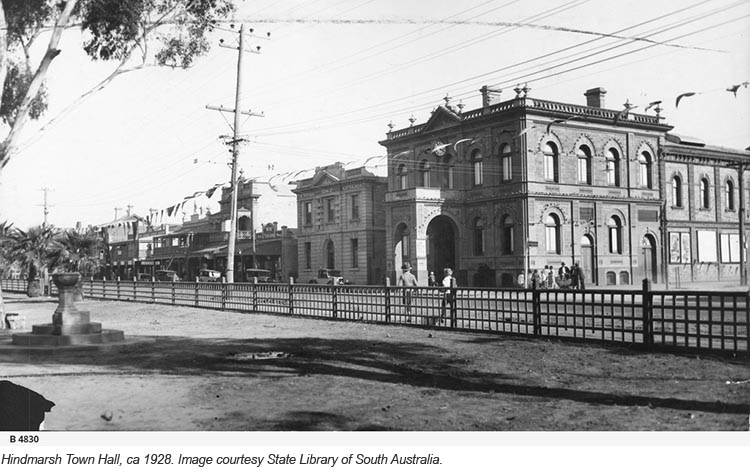 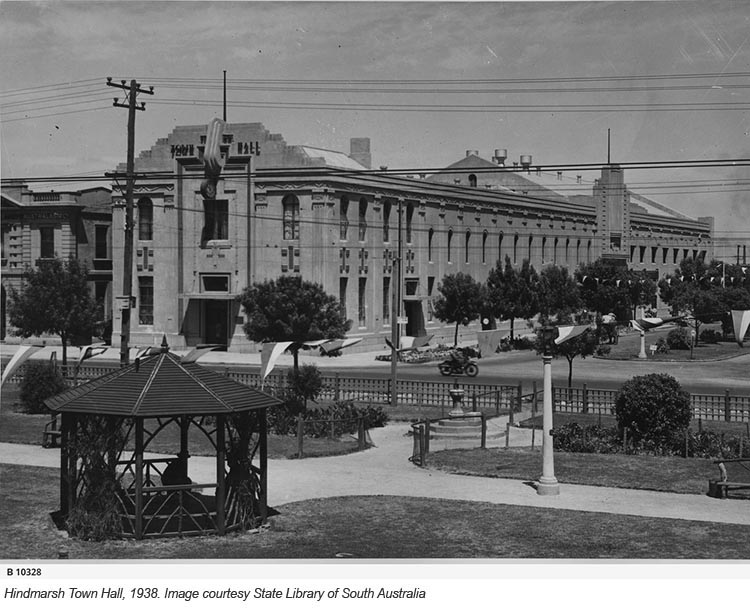