The bandstand, lamp standards and drinking fountain in the Port Road Reserve at Hindmarsh are remnants of a reserve beautification scheme.

Hindmarsh Council had first suggested that the State Government adopt a beautification scheme for Port Road in 1916. It was felt that, as Adelaide’s main arterial boulevard, it should be made more attractive by improving and making better use of its central reserves.

The Hindmarsh Brass Band (later Hindmarsh Municipal Band) formed in 1912. In 1920, the band collected funds to build a bandstand in the Port Road reserve. As well as assisting with the reserve beautification, the bandstand would provide a venue for open air concerts.

Around the same time, Lady Weigall, wife of the South Australian Governor, proposed that a children’s playground be built in the reserve as the district did not have. Mr and Mrs JM Reid, from local tannery JM Reid and Sons, made a substantial donation towards the playground’s construction

At the suggestion of Council, the funds for both projects were pooled. The opening of the playground and bandstand was celebrated in November 1921.

At the opening, the Mayoress of Hindmarsh, Mrs G A Noble, unveiled a marble drinking fountain donated by her and her husband, the Mayor.

The four gas lamp posts were donated in 1929 in the memory of CR Hocking, a well-known and respected Hindmarsh resident. Starting out as a pugboy, Hocking became closely involved with the brickmaking industry. He invented the first mill for elevating and tempering clay on the surface of the clay pit. He was a former Mayor, president of the Hindmarsh Town Mission, and an active member of many other local organisations.

The bandstand, lamp standards and fountain are State Heritage listed. 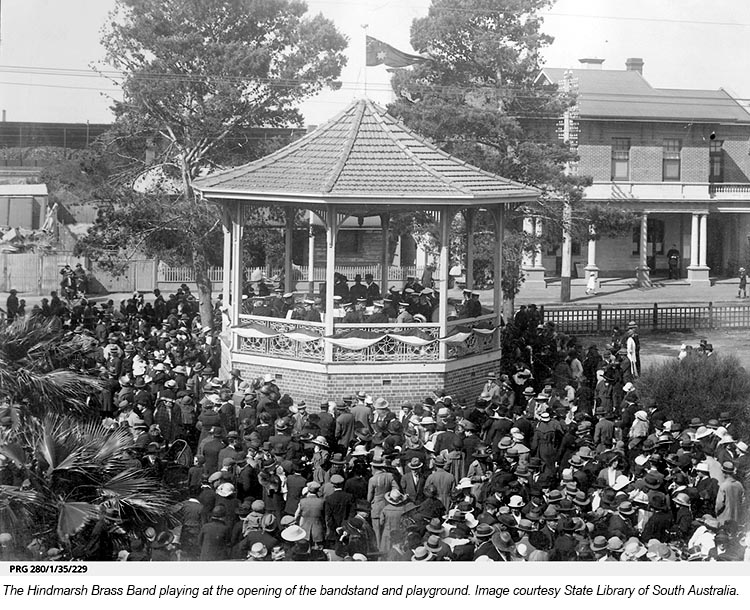