A visit to the James Brickworks is an opportunity to gain an understanding of a long-gone industry that was once a major contributor to the economic and social life of the City of Charles Sturt.

Brick making was once synonymous with Adelaide’s inner western suburbs, which were intertwined with brick kilns, chimneys and pugholes. The Beverley, Welland & Allenby Gardens area alone was once the home of a dozen major brick and pipe works.

The crew from SA Weekender popped out to Toogood Avenue, Beverley to explore the James Brickworks site, and discover more about the rich history of brickmaking our City.

The James family began brick making at Welland just after World War One and moved their operations to Toogood Avenue, Beverly in 1923. By the 1950s there were five rectangular intermittent downdraft kilns capable of holding about 150,000 bricks per firing and a circular kiln for pipe production. The James Brickworks ceased production in the early 1970s due to the depletion of the clay reserves and the introduction of pollution controls.

City of Woodville (now City of Charles Sturt) purchased the James Brickworks site in 1974 primarily to use the former pughole as a rubbish tip. When purchased, the site comprised five vaulted kilns and one beehive kiln. One vaulted kiln was demolished soon after due to its deteriorated state. Drying sheds, engine house, moulding shed and office building associated with the kilns were also demolished.

With other local brickworks winding up operations the significance of the remaining James kilns as relics of the area's history of brick production was soon recognised. It was intended to transform the James Brickworks into a brickmaking museum, and in the 1990s, a number of steps to improve the site were taken. This included the relocation of machinery from Hallett’s Allenby Gardens brickworks prior to its demolition.

However, a brickmaking museum was never fully realised due to ongoing concerns about site safety and the financial investment required, with the deteriorated condition of the kilns posing a major challenge. This deterioration has predominantly occurred as a result of the kilns no longer being used for brick production; the process of firing bricks contributes to the stability of the kilns themselves.

In 2017, after a number of years planning and consulting with the community, a major conservation project was commenced. As a result, the James Brickworks is now an attractive heritage destination that shines a light on the role of the local brickmaking industry in the development of Adelaide. The site features: 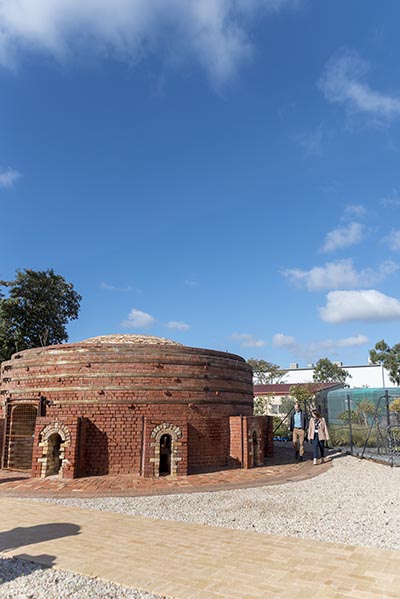 The James Brickworks is located on Toogood Avenue, Beverley (opposite our Recycling & Waste Centre). It is open 8am – 3:30pm, Monday to Friday (excluding Public Holidays). There is no cost to visit.

Guided tours for groups are available on request. Please contact 8408 1111 for further information.

The James Brickworks is a State Heritage site because: