Hindmarsh’s National Bank branch opened in 1874. It occupied a brick and limestone residence that had previously been doctor’s rooms.

The bank made news in 1889 when it was robbed by teller TE Jenner. The theft was only discovered after he failed to attend work one morning. Jenner successfully absconded but later handed himself into London police.

In 1917, new substantial banking chambers and offices were built and the manager’s residence improved.  There was a lot of building activity in Hindmarsh at this time, and the new bank was seen as further evidence of the stability of the town.

The building is recognised as a Local Heritage Place. Interesting features include hammered freestone walls, the wrought iron fence and gate. Parts of the earlier residence survive at the rear. 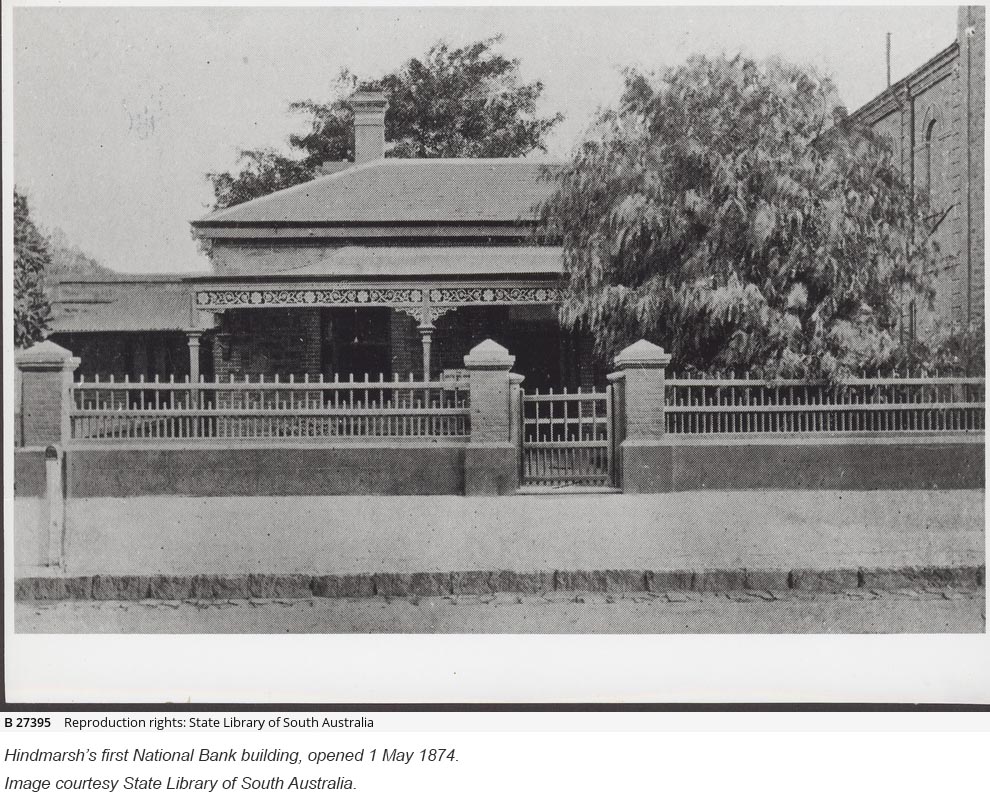 The Savings Bank opened an agency in Hindmarsh in 1884. It operated from the Post Office. A significant increase in demand for banking services led to a branch being established. It was the first metropolitan branch of the Savings Bank. When it opened in 1911, it was declared a ‘monument to thrift’.

The building itself was considered ‘a valuable addition to the architectural adornment’ of Hindmarsh. It was designed by architect Frederick W Dancker, and was built by local contractors, James King and Sons. Locally manufactured bricks were used in its construction.

An article in The Advertiser provided the following description of the bank on its opening:

The structure is two-storied, and built of red brick on a dark stone base, with grey cement dressings.

The central public entrance is flanked by columns under a large semi-circular arch, over which is corbelled a three-light oriel window carried up to the curved pediment, forming the central feature of the front parapet.

The banking chamber is 32 ft. square and 15 ft. high. It is lighted by six windows, and is entered from an inside porch through swing doors. The ceiling is divided into panels, with moulded beams of red pine, which are varnished in harmony with the handsome and substantial blackwood fittings.

The strong-room and clerks' room, with lavatory, are approached from the banking chamber.

A side entrance, with a neat iron gate and railing, leads to the residential accommodation provided for the manager, and this comprises convenient and well-appointed premises. ‘The Savings Bank’, The Advertiser, 30 March 1911, p11.

The building is listed as a State Heritage Place. A Port Road landmark, it is largely in original condition and is a particularly significant example of its period and building type.