William Blackler arrived in South Australia in 1839. He became a successful Port Adelaide businessman after finding fortune in the Bendigo Goldfields. In 1868, Blackler purchased Fulham Park Estate in the Reedbeds from AH Davis. The property extended from Grange Road to south of Henley Beach Road.

Blackler had an interest in horses and believed that there was a need for improvement in South Australian racehorses. In 1874, he established Fulham Park Stud following a visit to England where he bought three thoroughbred stallions, Countryman, Winterlake and Sir Edmund; brood mare Bridal Wreath; and trotting stallions, Young Shales and Flying Scotchman. More mares were purchased during a second trip in 1876.

A journalist visited Fulham Park Stud in late summer in 1884 and provided the following account of the property:

A very easy jaunt from town to any lover of good horse stock is Fulham Park, on the Henley Beach Road…. Just at this season of the year the paddocks by the roadside, which are famous for supplying the best lucerne obtainable in the colony, fill the air with a beautifully fresh perfume… Mr Blackler has built his homestead so far back from the road that its roof only is visible from the tramcar and one has to traverse a good-sized paddock ere he finds himself at the bridge across the Torrens by which access is gained to the stables and homestead of Fulham. These are partly enclosed with fine trees, and even on a tolerably hot day there is shelter and cool shade for the equines, and a cordial reception within the house for the visitor… i

Blackler died in 1896. The Stud passed to his son, WA Blackler, who continued with its operation until his declining health saw the property sold to Sir Sidney Kidman in 1912. The Critic newspaper featured photos of the Stud and Blackler family in March 1903: http://nla.gov.au/nla.news-article212154947

Sir Sidney is renowned as Australia’s ‘Cattle King’. He developed a chain of cattle stations in South Australia and the Northern Territory, allowing cattle to move to food and water during drought and floods. The suburb Kidman Park is named after him.

Sir Sidney had developed an interest in horseracing and continued to operate Fulham Park Stud for thoroughbred breeding. In 1921, The Sport newspaper described the property during a visit:

Fulham Park, with its tree-studded paddocks many of them hedge girt, is a place of beauty, and it is a pleasure to spend an afternoon strolling over the estate… The property is looking at its best just now, the green of the paddocks being a sight to gladden the heart…ii

The article also reported on the Stud’s activities and Sir Sidney’s desire to continue producing quality horses: “Those that Sir Sidney reckons do not come up to the standard he has set for the establishment are culled out, and either sold or dispatched to one of his other properties.”

Sir Sidney died in 1935. By this time, his son Walter Kidman was managing the Stud. In the 1980s, Walter’s daughter Anne recalled childhood visits to the Stud from their family home in Unley Park. She described, “driving into the entrance on Henley Beach Road, past the lines of mares grazing by the side of the road. There were green pastures then, with very few homes in the area. There were haystacks nearby, to feed the horses, and rows of stables to the north of the homestead, for housing foals at foaling time.”iii

Fulham Park began to be broken-up in 1935-36 when the Engineering & Water Supply Department acquired land south of the Torrens for the construction of Breakout Creek.

In 1949, 50 acres at the northern end of the Stud were sold to the Housing Trust. This was subdivided as Kidman Park in 1954.

The Kidman family retained 70 acres of Stud land throughout the 1960s. Walter Kidman died in 1970. In 1973, all but three acres of land surrounding the homestead were sold for just shy of $20,000 an acre. Subdivision commenced in 1975.

The final 3 acres of Fulham Park Stud were subdivided in the late 1980s. The old homestead still exists and is located on Riverway Place, Kidman Park. It is registered as a Local Heritage site. 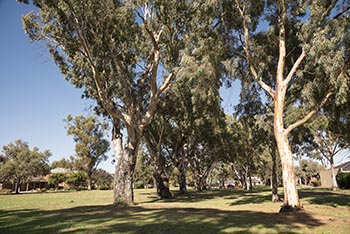 An avenue of large gum trees extending through Glenwood Reserve, Kidman Park is a remnant of the main track that connected the Fulham Park Stud homestead and stables to paddocks and a training track.

These River Red Gums are important reminders of Kidman Park’s past. While much of the landscape has changed with urban development, the line of trees has remained.

Kaurna Meyunna have been the custodians of the Country where the City of Charles Sturt is since the first sunrise.

A cultural mapping of Charles Sturt, undertaken by Karl Winda Telfer, a Kaurna Cultural Custodian, and Gavin Malone, a cultural geographer, details the Kaurna story of our City.

The land along the River Torrens Karrawirraparri was a prime camping area for Kaurna meyunna and provided many food and other resources as well as shelter. It was also a travelling corridor between the coast and the foothills.

Early Fulham Park land owner AH Davis noted:  “[a] native track runs on either side of the Torrens, and [it is] pretty well trodden too”.

The riverbanks and nearby were used for burial places. Newspaper reports show that Fulham Park Stud activities disturb a number of these sites. Remains of five people were uncovered in 1927 during fox eradication that included destruction of fox borrows. The Mail reported:

Mr J. Horsley has lived at Fulham Park for many years. He was there when Mr WA Blackler owned the property, and has seen many aboriginal skeletons taken from its paddocks. In commenting on the find Mr Horsley said that some years ago half of the sandhill from which they were taken was removed, and many similar skulls and bones found.

Mr Horsley said there was little doubt that parts of Fulham Park in days past had been used by the natives as a burial ground. During the time he was residing at the famous stud farm scores of skeletons were found.

In the 1980s, a student from Kidman Park High School interviewed the granddaughter of Walter Kidman. The interview account referred to Aboriginal camps along the River Torrens, which her father, Robin Abel Smith, would visit with workhands from Fulham Park in presumably the 1960s: “There are probably the remains of their tribe there. It was probably a burial ground.”iv

The City of Charles Sturt would like to acknowledge the assistance of Mr Don Lee in documenting the history of Fulham Park Stud.