The Mothers’ and Babies’ Health Association (MBHA) formed in South Australia in 1909.

In Hindmarsh, the MBHA initially operated from a room in the Memorial Institute.

In 1927 the Corporation of the Town of Hindmarsh granted the MBHA a site in the Port Road reserve for the construction of what would be Adelaide’s first purpose built baby Health Centre.

It was seen as a continuation of a Port Road reserve beautification scheme. A site next to the children’s playground was selected so that visiting mothers could leave older children to play.

Numerous local firms donated bricks for the centre’s construction. It was designed by architect Mr H Irwin and was officially opened on 17 December 1927.

Services provided from the centre included weight and growth checks and the provision of instruction on ‘feeding, sleeping, management routines, and the inculcation of order, regularity, good habits and self-control in both mother and baby’. Services were provided free of charge. Donations, community dances and fundraising events supported the operation and upkeep of the centre.

In 1936, the MBHA vacated the centre and the Hindmarsh Town Mission moved in.

The Mission was a benevolent society formed in 1865 by prominent South Australian, George Fife Angus. It distributed relief, assistance and guidance to poorer members of the Hindmarsh community. It was the first mission of its kind in South Australia.

1936 was a difficult year for many in the Hindmarsh community. Years of depression and unemployment had begun to take its toll, with many residents ‘more destitute than they were in previous years.’ The Mission called for donations of ‘money, clothing, boots, linen and bedding, and especially bedsteads.’

While the Mission vacated the centre in the 1970s, it continued to operate until 1996. At its dissolution the Mission was believed to be one of the longest running benevolent institutions in Australia.

The former Health Centre is recognised as a Local Heritage Place due to its association with the MBHA, the Hindmarsh Town Mission and the role these services played in the lives of Hindmarsh Residents. 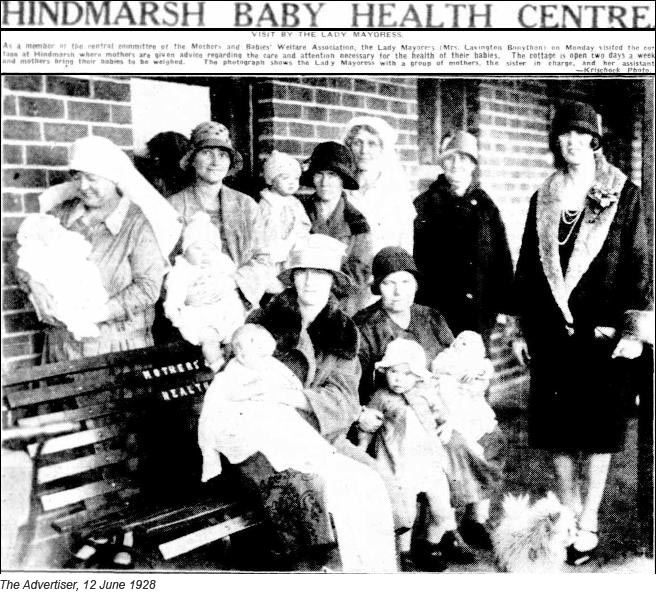